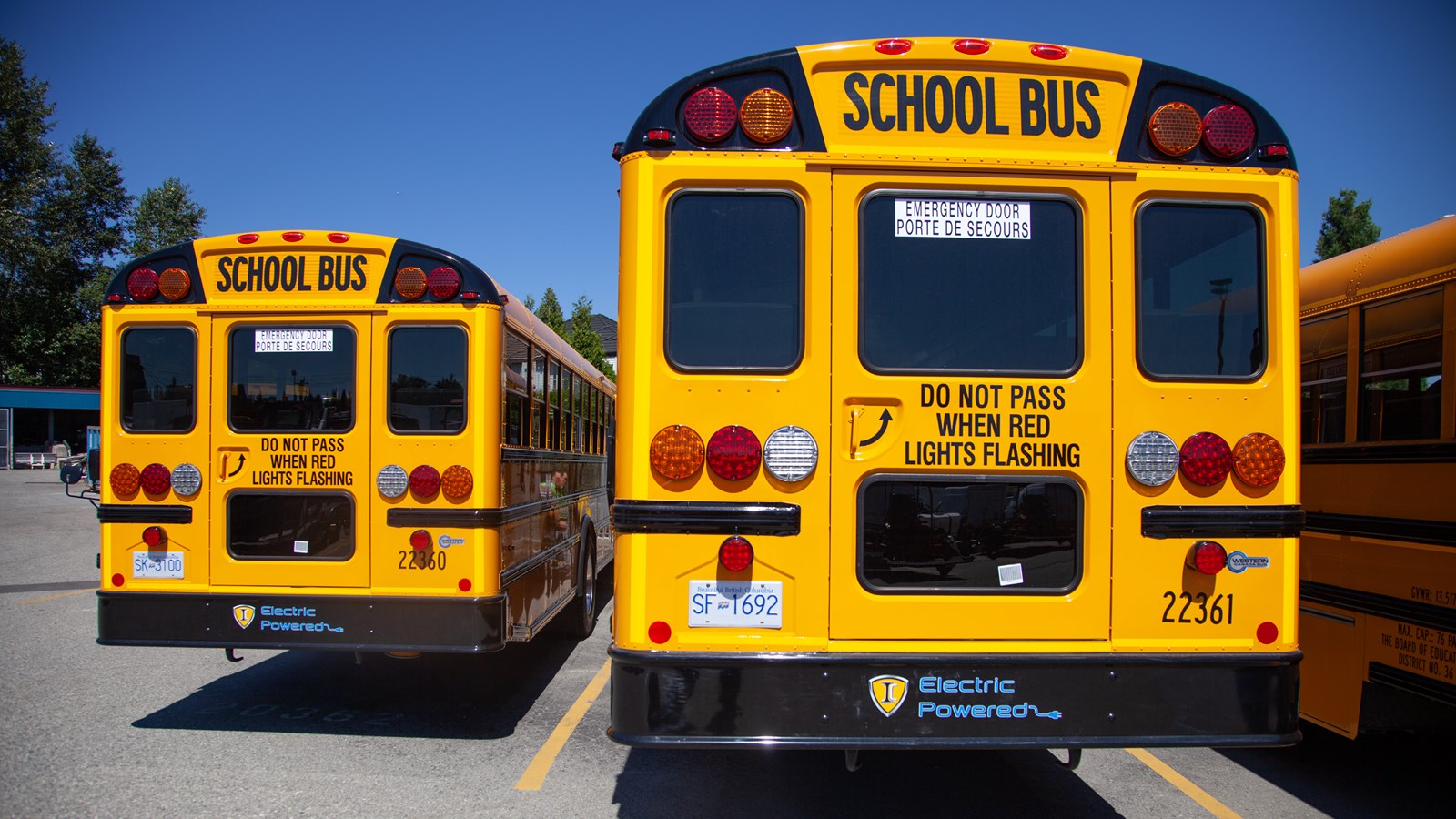 The district’s busing operations are going green, thanks to the addition of two electric buses to Surrey Schools’ fleet as part of efforts to find and use alternative sustainable energy solutions.

“Our board is committed to reducing greenhouse gas emissions across the district,” said Laurie Larsen, Chair of the Surrey Board of Education. “These electric buses will replace two of the district’s 15 diesel buses, marking the start of our long-term plan to convert the fleet to electric.”

“We’re focused on getting our vehicles off of diesel and gas and onto electric, which will generate fewer emissions,” said Achal Gandha, Director of Facilities and Transportation Services. “It was time to replace these vehicles, so instead of replacing them like for like, we wanted to go with a more sustainable option.”

Each electric bus seats 76 passengers and has a range of 200 kilometres, with a charge time of 8.5 hours using the charging stations at the District Facilities Centre (DFC). The electric buses run quieter than their diesel counterparts but are otherwise identical to the existing diesel buses, making it easy for bus drivers to learn how to drive the electric buses.

“It’s the exact same brand as the diesel equivalent,” said Associate Director of Operations and Transportation Thomas Choe. “The operator switches are 90% the same as our current diesel buses, so the training required for drivers on these electric buses is minimal, and will primarily focus on drivetrain and driveability.”

In addition to reducing the district’s carbon footprint, the switch to electric comes with numerous financial perks, including lower operating costs and less maintenance.

Choe said it costs significantly less to charge an electric bus compared to fueling up a diesel bus, and the absence of an exhaust and no need for engine or transmission oils, puts less burden on the district’s in-house maintenance facility.

“We are looking at a minimum 75% savings in fuel cost compared to diesel, and a minimum of 75% reduction in maintenance because there are fewer moving components,” said Choe. “For instance, the fact the vehicle has regenerative breaking means you’re consuming considerably less brake pads and rotors while recharging the battery.”

While Surrey Schools isn’t the first district to add electric buses to its fleet, Choe said they were able to consult with other districts to better prepare in terms of infrastructure and operations. With the two electric buses now on the lot, he said they aim to use the buses as much as possible, not just in the morning and the afternoon.

“Typically, bus routes are anywhere between 60 and 100 kilometres for the full day, and so we’re able to use it on some of the shorter field trips in between,” said Choe. “The more we use it, the more we save.”

“From a sustainability standpoint, electric is a step in the right direction,” said Gandha. “We’re happy these buses are here, and we’re excited to put them to good use for students.”