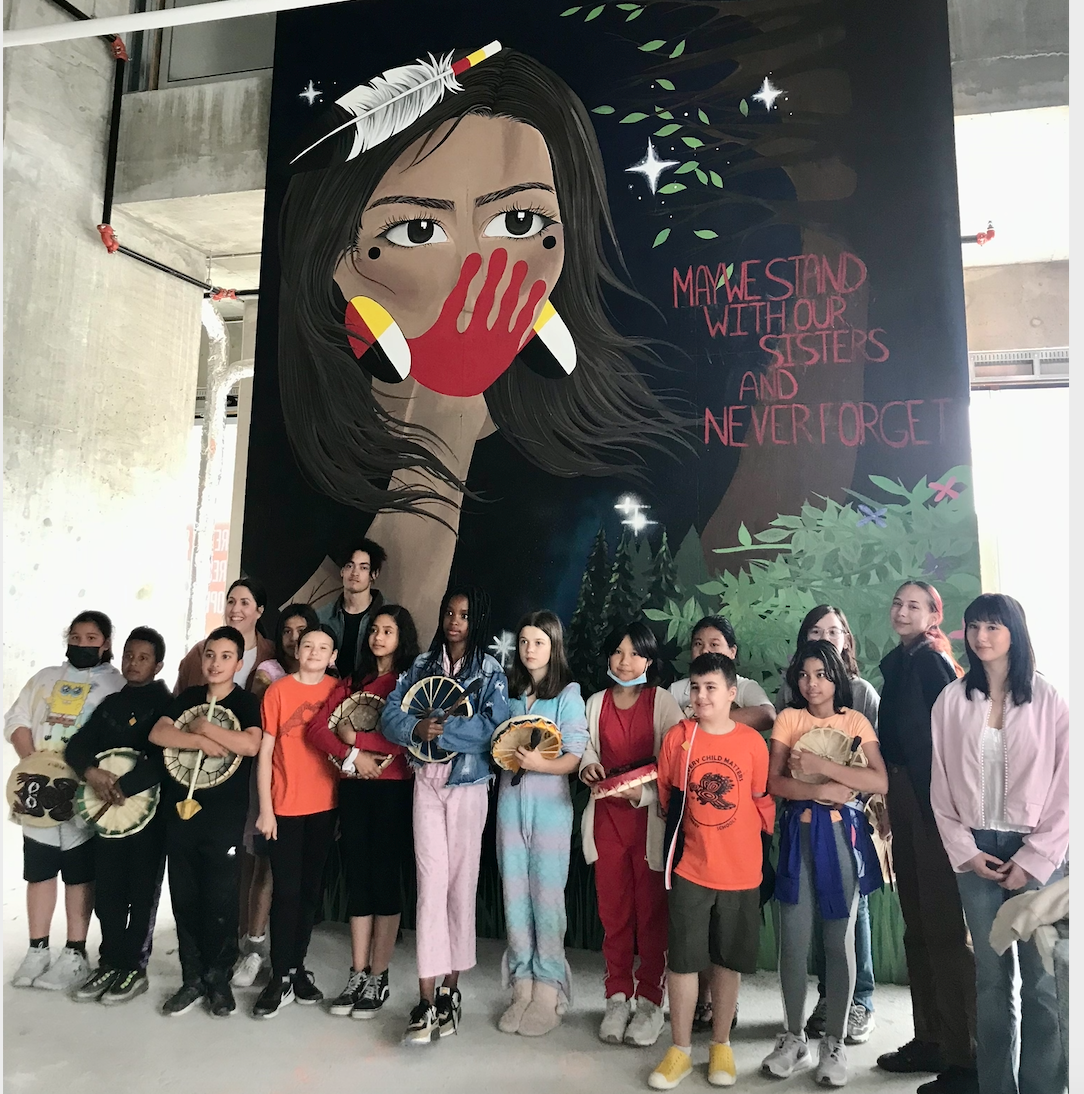 From right, WRAP students Hannah Adams, Selena Oakley and the K.B. Woodward Elementary Morning Beats Indigenous drumming crew were on hand for the unveiling of Stolen Sisters, a new mural designed by Adams and Oakley.

For the third year in a row, students from the district’s Wraparound (WRAP) program have painted a community mural to highlight social justice issues, with this year’s dedicated to missing and murdered Indigenous women.

Painted by students Hannah Adams and Selena Oakley at King George Hub (on the corner of King George Boulevard and Fraser Highway), the newest mural, titled Stolen Sisters, depicts an Indigenous woman with a red handprint over her mouth – a symbol to promote awareness of missing and murdered Indigenous women – with the words, “May we stand with our sisters and never forget.”

“They’ve made a very powerful message, they wanted to make sure it got the attention and recognition from the community while also doing something together that would provide inspiration for all walks of life,” said Surrey Schools social worker Jon Ross. “It’s a head turner for anyone passing by to stop and connect with the piece. It’s very moving.”

Stolen Sisters is the third mural in Surrey painted by WRAP students, following last year’s Every Child Matters mural, in honour of victims of residential schools and the resilience of Indigenous communities, and the award-winning Common-Unity, which showcases positivity and racial inclusivity in Surrey.

Oakley previously worked on the Every Child Matters mural, as did Earl Marriott Secondary graduate and Emily Carr University of Art + Design student Nathan Preshyon, who provided guidance for sketching out the most recent mural and scaling it to six pieces of plywood.

“Just the opportunity alone is credit to the work the youth have done with the previous two murals. The quality of the work and the inspirational messaging has created a lot of buzz among that Hub development,” said Ross. “Everyone who was in that room was really moved by the powerful energy that came from the unveiling.”

Ross thanked PCI Developments for commissioning the project and Ledcor Group for providing assistance from workers with operating the scissor lift that Adams and Oakley used to paint the higher parts of the mural. The mural is to be installed in the promenade beside the new Save-On-Foods.

“It’s amazing – literally thousands of people will be walking by it every day,” said Ross.